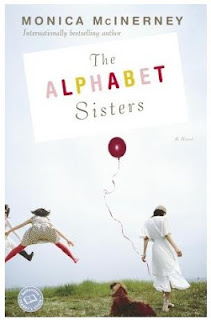 I can’t explain why it took me until 2013 to read my first novel by Monica McInerney. She is an Australian born author with international bestsellers including: A Taste for It, Upside Down Inside Out, Spin the Bottle, and most recently Lola’s Secret. I often exchange books with friends and family and was not familiar with Monica McInerney until I was handed a book called The Alphabet Sisters. The book was a quick read filled with dynamic characters that came to life with the authors great detailing of physical attributes as well as emotional characteristics. McInerney wove together a beautiful story of a family in turmoil who overcame their own fears and selfish pride. I can only apologize for not reading this delightful story earlier (it was copyright in 2004) and I can say without a doubt that I will be reading more of McInerney’s books in the very near future.

This lovely work takes place in the Clare Valley of South Australia just before the 80th birthday celebration of Lola, the grandmother to the Alphabet Sisters. Lola has decided to reunite her estranged granddaughters at the family’s small motel in the lovely wine country. The girls oblige their grandmother (rather begrudgingly) and come to the motel. They have no intention of being as close as they had once been as a singing group touring as the infamous Alphabet Sisters, with their eccentric outfits and show tunes. The family dynamics range from uncomfortable and tense to tender and loving as the story unfolds. McInerney has a way of bringing characters to life without any one individual becoming an antagonist. There is something to love about each of the sisters: Anna is the oldest and is quick to take charge, Bett is the middle child feeling awkward and unsure of herself from time to time, and Carrie is the youngest and the one sister who had never left and was still in the Clare Valley running the motel with her parents when her siblings returned. Lola is the humorous grandmother and matriarch of the family; she too has a secret that doesn’t come out until near the end of the book. To find out more about her secret, you can pick up a copy of Lola’s Secret short listed for the General Fiction Book of the Year in 2012 Australian Book Industry Awards and was published in the USA in October 2012.

The Alphabet Sisters takes a close look at family dynamics, sibling relationships and rivalries, secrect, and different points of view. McInerney brought to life the many unique characters whose bonds and relationships delighted their aged Grandmother, Lola who was the catalyst for reuniting the family and mending the broken relationships. McInerney’s first job out of high school, at age 17, was as a wardrobe girl and later a script writer. She pulled from her own background as the story of the Alphabet Sisters unfolded with a home grown play, auditions, local amateur talent, and a packed performance to fund a new ambulance for their town.

I laughed, cried, and rolled my eyes throughout this read. When done, I wished for more chapters because I wasn’t ready to leave the characters I had grown so attached to. I would recommend this book to others and give it five out of five stars.