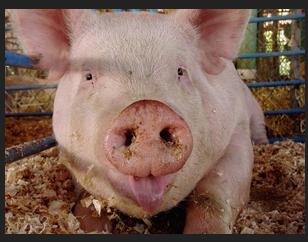 "Only Pigs Wallow" my mother would say when I was in a funk as a child. I loved reading Anne of Greene Gables, so I was likely to come home and tell my mother that I was in the depths of despair because something terrible had happened. During my pre-teen years, the something terrible would have been a fashion disaster with my clothing, a bad hair day that couldn't be tamed with my extra large bottle of Aqua Net Hairspray,  or a zit that couldn't be disguised with an ample covering of Cover Girl foundation. I dated a pig farmer when I was 16 and my mother may not have been right about pigs being the only animal that wallows, but I found out first hand that pigs stink. Maybe it was then that I decided to take her advice, or maybe it's some genetic gift that helps me see the bright side....whatever it is or it isn't...the fact is, I seldom wallow.

and for the record:

When I miscarried in December, I wasn't wallowing, I was drinking...the difference being that wine doesn't sink. Wallowing in the mud has a distinct odor.

When my son was having health issues and experienced a trauma, I wasn't wallowing, I was hiding...the difference being, if I were rolling around in the mud, you'd notice...I was hiding and hoping you would forget about me.

Now that we got that straight, I want to talk about how we can take those self-pitying moments and turn them into a non-wallowing situation:

Drink instead (I should be more specific as I tried drinking wine instead and it gives you one heck of a headache, let's start over)

Drink Water - it's easier to think clearly when you're well hydrated (isn't that much more profound than getting drunk?)

Keep Setting Your Alarm - it's good to sleep, but sleeping for 3 days isn't a good idea and is very close to wallowing (especially if you ask my mother)

Talk to happy people - I was going to tell you to talk to anyone that will listen, but talking to unhappy people doesn't get you out of wallowing, it just gets more people full of mud and then you all stink

That's really the only advice I have. Today we got some news that my son has to have another surgery. Part of me wants to wallow but then I remembered that the first surgery was 50% successful, so there's a silver lining. I just filled my wine glass up with sparkling clear water, my alarm is set for 5am tomorrow, and I'm chatting with you...so I'm taking my own advice and I'll let you know how it works in the morning. I can however guarantee that I'll feel better than I did in December when I drank an entire bottle of wine while wallowing...so as much as my husband might like to see me rolling around in the mud, I will forego the wallowing for this evening and big you all goodnight.

~May your paths be abundantly filled with lemons, sugar, sunshine, and ponds filled with clear water instead of mud! <3 Crystal
Posted by iamagemcrystal at 6:28 PM