Good morning and thank you to WOW! Women on Writing for bringing this fabulous book blog tour to my Bring on Lemons Blog. I'm excited to review A Southern Place by Elaine Drennon Little who has generously offered a giveaway of her book. The giveaway is open to US Residents for a physical copy and internationally for an ebook. The winner will be chosen using Rafflecopter and the giveaway ends Wednesday, August 28th at midnight CST.

Here's my Review, but scroll down for additional information on the book and author...

Book Review: A Southern Place by Elaine Drennon Little
By Crystal J. Casavant-Otto
A Southern Place   begins as a beaten and battered young woman is fighting for her life in the ICU. Is that really where it all begins or is it where it ends? Does life begin and end in the same place? I started reading and didn’t want to stop until I had a better understanding of who this young woman was and how she had come to be in such a sad place. Sure, I knew her name was Mary Jane Mullinax and folks called her MoJo, but there had to be more to the story than that. Sherriff Purvis of Dumas County Georgia described Mo Jo and her family as good folds, quiet-like and said there was no one to call. Her mama had died years before and she had never known her daddy. As a reader, I immediately felt I didn’t want to leave her side until she was out of the ICU and on the road to recovery.
Little did I know that A Southern Place would take me back in time to the days when Mo Jo’s grandparents were working the land and the rich Georgia soil. Wherever this story was going, I was going with it. I wanted to know everything about this young girl, her parents, her grandparents, and especially her uncle Calvin (Cal for short). Cal had been important in Mo Jo’s upbringing and I was intrigued by a man who would selflessly sacrifice everything for the sake of his family. Cal had died years before Mo Jo found herself alone and near death in the ICU, but something tells me Mo Jo had the same love for her family that her uncle had. She managed to take quite a beating and somehow protect her unborn child and that just seems like the same sort of family value that Cal showed when he selflessly put everyone else before himself.

Mo Jo and her family hadn’t come from the best of backgrounds, but they were proud. As the story advanced in years, it became clear that the Mullinax family was deeply attached to the land; they worked the land and believed that hard work would win in the end. I found myself cheering them on and as things fell apart I slumped in my chair feeling the same defeat they must have felt as they took out another mortgage and sold off some of their precious land.


Little’s descriptions and understanding of everything from farming to history really made A Southern Place come to life for me. This may be Little’s first published novel, but I certainly hope it won’t be her last. She has a way of bringing her characters to life and her depictions of the south have me longing for a visit. I am curious about peanut plantations as well as intrigued by the author herself – a piano teacher with thirty years’ experience turned author, now that’s something I didn’t see coming! Thank you Elaine Drennon Little for this exceptional book and I do hope to read more from you in the future!

Now - let me tell you a little bit more about A Southern Place - here's the book summary: 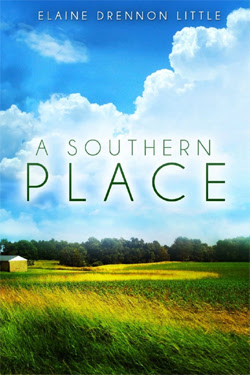 A Southern Place is a moving book that is expertly written. Mary Jane Hatcher—everyone calls her Mojo—is beat up bad. She's in the ICU of Phoebe Putney, the largest hospital in South Georgia, barely able to talk. How Mojo goes from being that skinny little girl in Nolan, a small forgotten town along the Flint River, to the young woman now fighting for her life, is where this story begins and ends.Mojo, her mama Delores and her Uncle Calvin Mullinax, like most folks in Nolan, have just tried to make the best of it. Of course, people aren't always what they seem, and Phil Foster—the handsome, spoiled son of the richest man in the county—is no exception.As the story of the Mullinax family unfolds, Mojo discovers a family's legacy can be many things: a piece of earth, a familiar dwelling, a shared bond. And although she doesn't know why she feels such a bond with Phil Foster, it is there all the same, family or not. And she likes to think we all have us a fresh start. Like her mama always said, the past is all just water under the bridge. Mojo, after going to hell and back, finally comes to understand what that means.Paperback: 294 pagesPublisher: WiDo Publishing (August 6, 2013)ISBN: 1937178390Twitter hashtag: #ASPLittleA Southern Place is available as a print and e-book atAmazon.

It is also my pleasure to tell you a little more about Elaine Drennon Little:

Adopted at birth, Elaine lived her first twenty years on her parents’ agricultural farm in 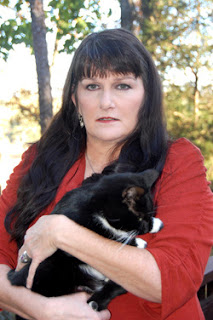 rural southern Georgia. She was a public school music teacher for twenty-seven years, and continued to dabble with sideline interests in spite of her paid profession. Playing in her first band at age fourteen, she seemed to almost always be involved in at least one band or another. Elaine’s writing began in high school, publishing in local newspapers, then educational journals, then later in online fiction journals. In 2008 she enrolled in the MFA program at Spalding University in Louisville, where upon graduation finished her second novel manuscript. Recently retiring after eleven years as a high school chorus and drama director, Elaine now lives in north Georgia with her husband, an ever-growing library of used books, and many adopted animals. She is excited to announce her debut novel A Southern Place.Find out more about Elaine by visiting her online:Author blog: http://elainedrennonlittle.wordpress.com/Author Facebook page: http://www.facebook.com/elaine.d.little

Posted by iamagemcrystal at 8:04 AM