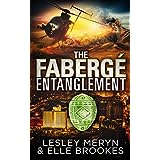 Action, intrigue, and a detailed plot makes “The Faberge’ Entanglement” by Lesley Meryn and Elle Brookes an excellent read. This is a book you will easily finish in a weekend if not a single afternoon. The fact there is romance included in this tale makes it even more gripping. The chapters are short and they keep you at the edge of your seat.

If asked to describe “The Faberge Entanglement” in simplest terms, I would say it’s a romance novel mixed with a mystery/thriller or is it a mystery/thriller mixed with romance. The tension between characters keeps readers wanting more. I appreciate how well the characters were developed throughout the story. I didn’t think the book was predictable at all, and as I said before, it’s a very quick read. The unusual circumstances pulled me in from the beginning of the book and the excitement of the plot kept me wanting more until the very end.

Sabinne ‘Saber’ Darrieux’s father, the billionaire CEO of Frontenac Global Security has been kidnapped. His ransom is not cash in a numbered offshore account, or a briefcase of Bearer Bonds but something utterly unique, incredibly valuable, and until recently, hidden away from the world.

The kidnapper seems to know Saber very well, and knows that the next day, through her work as an elite translator she will be in the same location as the Object. She must steal the Object and deliver it to the kidnapper to ransom her father.

Adrian Steele, a British Intelligence agent has just come off of two harrowing missions. Upon returning to London for a well-earned rest, he learns that his friend and fellow agent, has been murdered in Moscow, but not before he made use of a unique Object as a mobile ‘drop site’ for the valuable intelligence he was carrying.

The drop site is traveling from Moscow to England. Steele insists on completing the mission to honor the death of his friend, Gerry Cornell.

At an ultra-chic quasi-diplomatic gathering in a mansion in Windsor, England, Saber and Steele meet and find themselves faced with a powerful, undeniable attraction. But at the moment, this compelling attraction is very inconvenient.

In reality they are at the mansion to check out the security arrangements — for their own reasons — to steal the Object, a Fabergé egg worth thirty million dollars. But who will get to the egg first?

Fabergé eggs are very famous for their unique surprises. Saber and Steele are about to be very surprised, indeed.

And when Saber clashes with Steele; more than sparks will explode!

Elle Brookes grew up in Los Angeles, California, but lived in Jamaica for three years when she was a Peace Corps Volunteer. She moved to San Francisco and studied at the California Culinary Academy, and went on to become a private chef to a well-known L.A. based television production company.

From an early age Elle was a voracious reader of adventure stories and from elementary school through high school, she tried writing her own stories of places foreign and exotic. She studied Art History and continued writing in college, focusing on short stories.

A dedicated and passionate traveler, Elle has explored river caves in Jamaica and Costa Rica, hiked glaciers in New Zealand and Iceland, and done dogsledding in Greenland and Iceland. She's danced a fa'a Samoan haka and slept in a fale on the island of Savai'i in Samoa, hiked in the northern mountains of Thailand along the border with Myanmar in the Golden Triangle, and in Haiti, she witnessed a white goat ceremonially sacrificed to Erzuli Freda by a powerful Houngan. For a time she did Performance Driving in Southern California, and has years of study and experience dedicated to fencing, theatrical combat, archery, and horsemanship.

Elle currently lives in the central highlands of Costa Rica with her dog Pixie, and her hedgehog, Quiller.


Posted by iamagemcrystal at 4:40 PM