Picture it...an SUV loaded with a cooler, several changes of clothing, and four occupants. I was driving, my uncle was in the passenger seat, and my two young children (5 & 6) are buckled in the back seat. The vehicle is headed "up north" for a visit with some relatives who believe it or not, the children have never met (totally my bad there...). I am 34 weeks pregnant and 36 years old so my physician has given me strict instructions to stop every 45 minutes and get out to stretch my legs.

We've already stopped several times; the first time we stopped at a cheese factory and the second time at a gas station/fast food restaurant, and now we are less than 30 miles from our destination and it's time to stop yet again. I'm sort of an adventurer so the sign that read "horse back riding, wagon rides, and orchard this way" sounded way better than staying on the highway and looking for yet another cookie cutter establishment. I cranked the wheel to the right, slowed down to 45 mph and headed in the direction of the signs.

12 minutes later, we found ourselves on a farm not all that different than our own. Older equipment, a modest house, and a hard working couple heading out to the fields with the chopper and wagon. Difference being, this farm had pastures full of horses in place of our holsteins - either way...it felt pretty comfortable pulling in the driveway. The couple was friendly enough (especially considering we had disrupted their day). We learned the children were not old enough to go for a ride and the couple was too busy to entertain the thought of a wagon ride for 4 but once I explained that we weren't unfamiliar with large animals, they invited us to stretch our legs, check out the horses, and use the outhouse ... as long as we didn't touch the fences, or go into the fenced in areas.

Sounded like a plan to me and it was definitely not 'just another cookie cutter establishment' ... the driveway was lined with apple trees, the horses were friendly, and there wasn't another house to be seen. It was lovely and we felt right at home although we were careful not to overstay our welcome.

As we headed out the driveway, the GPS told us to turn left which was odd since we had come from the opposite direction and I would have assumed that turning right would have taken us right back to where we had diverted from the course. I shrugged my shoulders, took a gulp of cold coffee, made sure everyone was buckled in, and we headed left. Not 1/2 mile later we found ourselves on a single lane dirt road surrounded by woods. The road (let's be honest...and call it a trail...) looked more like an ATV trail than an actual road. I slowed down and looked at the GPS and sure enough it was showing that we were on a road and we were being instructed to follow it for 3 miles.

I could hardly go more than 10 mph and in some areas had to slow down to a crawl where the road had been washed out be previous rains and some soil erosion. Uncle Patrick was shaking his head because he has found himself in this very position a time or two in the past (ask him about my chasing waterfalls a few summers ago). The children were busy watching a movie and I didn't think they had noticed that our course had changed drastically. Then, all of a sudden a question came from the back of the truck (mind you, this was the first time all day the children agreed on anything) they asked in unison: 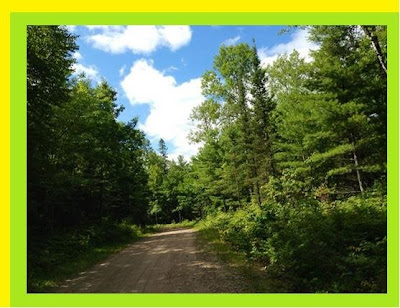 Of course that stopped me in my tracks ... of course we weren't lost, we were simply making the trip much more exciting by adding a bit of adventure to what would have otherwise been a very uneventful journey. I told them we weren't lost at all and we laughed at the absurdity of the question. The children went back to their movie and Uncle Patrick and I resumed our easy conversation and laughter ... because quite honestly, any sane person would have turned back ... but I've never claimed to be normal or sane!

As with every situation, I learned something ... you've heard the saying "it's not about the destination, it's about the journey" and how true is that? We got where we were going but years from now we probably won't remember what day of the week we went, what we wore, how long we stayed, or the reason for our trip in the first place. What we will remember is that somewhere along the line we stopped at a cool horse farm, peed on the grass in front of the fence, went off roading, laughed a lot, and had a great time as a family!

Now if you ask me ... we were way more found than we were lost, dontcha think?

May your paths be abundantly filled with lemons, sugar, sunshine, and found moments filled with adventure!

Posted by iamagemcrystal at 9:12 PM

Email ThisBlogThis!Share to TwitterShare to FacebookShare to Pinterest
Labels: adventure, family fun, getting found, getting lost, getting off the main road, having fun, laughing, up north trip