Join me as I welcome Sara Connell and her touching memoir, Bringing in Finn! First, let's hear from Sara about Unique Mother Daughter Relationships and then you'll find the giveaway for her memoir, Bringing in Finn ... and beneath that is a book summary and author biography.Thank you WOW! Women on Writing for today's book blog tour. 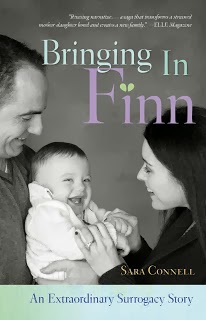 I read a book once that outlined a variety of different Mother archetypes: the nurturing mother, the supportive mother, the selfless mother, the narcissistic mother, the co-dependent mother, the jealous mother, the abandoning mother, the devouring mother.
My own mother was most like the “selfless mother”.  She put her children first, built forts, sponsored original plays and let us use (break, mess up) anything at all in the house in service of creative play. Still, we had a few areas—blind spots, I’ve heard them called—where we seemed to disconnect. In comparison to my sisters, particularly, I often felt rejected and less wanted. The problem seemed to be something to do with my own being—my personality. I was too sensitive; too something; too much.
In reaction to this, I went through a phase where I constantly sought approval—and then (when that seemed to fail), I distanced myself when I moved abroad with my husband. During this time, I voraciously inhaled scores of mother-daughter books—memoir, fiction, essay, young adult. I was fascinated by the searing, complicated, portrayals of these relationships and the undeniable, magnetic love that underpinned them.
One month, near the end of my time abroad, I went to an author named Carolyn Myss speak about relationships. She stood behind a podium that dwarfed her small frame and spoke about “sacred contracts” between parents and children, mothers and daughters.  “Regardless of your wishes or desires,” she said, “imagine that your mother was perfect, that she played the exact role you BOTH agreed to together. Imagine that you made an agreement to be exactly the way you were and that the agreement was made for something good.
I sat in the audience with my pen frozen over the paper I’d brought to take notes.I knew with certainty that at the core of my mother and my relationship was love. But I did not know how to reconcile this with the sense of “otherness” and rejection I had often felt as a child and teen. I didn’t know what to think about the idea of a pre-incarnation powwow, and certainly didn’t know what I thought of the idea that rejection and hurt and hurt could be a gift in a relationship.
But the week after that talk, I called my mother—and suddenly the distance embargo I’d created out of my need to find my adult voice and  heal, was gone. In the four years that followed, my mother and I forged a new bond. Adult woman to adult woman, we visited frequently and shared with each other our dreams and our fears. We became vulnerable.
And then, when my mother watched me not get pregnant and lose twins and experience a miscarriage and not get pregnant again, an idea came into her heart. She’d heard of a post-menopausal woman becoming pregnant. Each of her pregnancies had been effortless for her—and, she realized, her greatest times of joy. She had been searching for something meaningful and fulfilling to do in her retirement. So, in a tremulous letter, not knowing if the idea would be received with openness or disgust, she offered to be the surrogate for our child.
Two years later, my biological son, Finnean, was born, delivered by C-section at thirty-nine weeks by my then-sixty-year-old mother.
I don’t know if our years of misunderstanding served some good, or if they were simply a result of not knowing a better way to express the love we really felt for one another. My mother has said she was only able to make the offer of surrogacy because of the solidity of our relationship—because, after those foundational new years of adult connection, our connection had become tenacious and strong.
It is hard to know if our relationship is better for having gone through a time of distance and reconnection, like a bone that is broken and heals, stronger than it was before. But I know that our relationship is richer and deeper because of the journey we took. And I know with certitude that it is sacred. If there is a gift in those years of misunderstanding, it is knowing in a visceral way, that change is possible, and to appreciate (in a way that perhaps I would not have without the contrast) the profoundness and sweetness of real, unconditional mother love- a love that now -from both my mother and myself, is our legacy for Finn.

Bringing in Finn is an incredibly moving story of surrogacy and how it created a bond like no other between a mother and daughter.In February 2011, 61-year-old Kristine Casey delivered the greatest gift of all to her daughter, Sara Connell: Sara’s son, Finnean. At that moment, Kristine—the gestational carrier of Sara and her husband Bill’s child—became the oldest woman ever to give birth in Chicago. Bringing in Finn: An Extraordinary Surrogacy Story tells this modern family’s remarkable surrogacy story.After trying to conceive naturally without success, Sara and her husband Bill dedicated years to a variety of fertility treatments—but after Sara lost a third pregnancy (including the loss of twins at twenty-two weeks), they started to give up their hope. When Kristine offered to be their surrogate, they were shocked; but Kristine was clear that helping Sara become a mother felt like a calling, something she felt inspired to do.In this achingly honest memoir, Connell recounts the tragedy and heartbreak of losing pregnancies; the process of opening her heart and mind to the idea of her sixty-one-year-old mother carrying her child for her; and the profound bond that blossomed between mother and daughter as a result of their unique experience together.Moving, inspiring, and ultimately triumphant, Bringing in Finnis an extraordinary tale of despair, hope, forgiveness, and redemption—and the discovery that when it comes to unconditional love, there are no limits to what can be achieved. 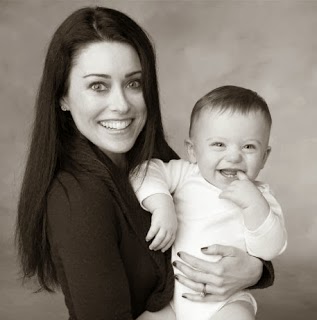 Sara Connell is an author, speaker, and life coach with a private practice in Chicago. She has appeared on Oprah, Good Morning America, NPR, The View, FOX News and Katie Couric. Sara's writing has been featured in: The New York Times, Good Housekeeping, Parenting,Psychobabble, Evolving Your Spirit, and Mindful Metropolismagazines. Her first book, Bringing in Finn: an Extraordinary Surrogacy Story (Sept 4, 2012 Seal Press), was nominated for Book of the Year 2012 by Elle magazine.

Posted by iamagemcrystal at 5:22 AM