Spring has sprung and the temperatures here in Wisconsin are creeping up - now, before we get busy plowing and planting fields let's take some time to delve into a fabulous new book! WOW! Women on Writing is helping promote more wonderful books and up and coming authors and we would love to include YOU in these tours! One in particular I'd like to share with you is Praying for Restraint by Allen Long!  I have the PDF version available TODAY and can provide them right away if you'd like to get reading - you won't want to wait! (Physical copies will be mailed by the author in late April after the April 27th publication date)

Please contact me today to reserve your copy  and participate in what is sure to be a fabulous tour. If you've never participated in a tour, feel free to inquire and I'll be happy to explain how it works - you don't even have to have your own blog!

Be sure to include the following:

*The name and url for your blog, or a note letting me know you do not have a blog

*A date you would prefer as your first choice, as well as a 2nd choice - this will be the date your review will be posted to your blog/this blog and social media. (the tours run as follows: author interview on May 17th on the WOW! blog, and reviews will post the 18th through the 27th)

As soon as all the dates have been filled for the tours, and a calendar has been put together, I'll email a media kit to everyone involved. This kit will include the author pictures and bios as well the book cover and official summary and buy links for Praying for Restraint. This email will also include the calendar for the tour and should be able to answer most (if not all) the questions you may have concerning tour participation. 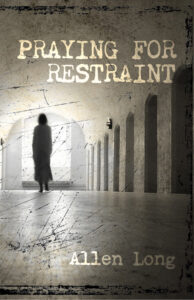 Praying for Restraint
By, Allen Long
Tour Begins May 17th 2021
About Praying for Restraint:
Allen Long works as a CNA-certified nursing assistant-at that supposed sanctuary of caring, an inner-city general hospital. What an unforgettable parade of bizarre, needy, abusive, menacing, endearing, and poignant humanity passes through its doors. And those are just the staff and administrators! Meanwhile, the patient population spans the affluent and sophisticated to the homeless, the mentally ill, addicts, gang members, and criminals in custody. Praying for Restraint takes the reader on a journey into the absurd and surreal that is ultimately uplifting and harrowing, both funny and heartbreaking. Long's struggle to survive a relentlessly toxic work environment with body, soul, and marriage intact is as gripping as the battle against childhood abuse in his previous memoir, Less than Human. Reviewers found that book "inspiring, honest, and beautifully written, engaging, and thought-provoking." Praying for Restraint earns that praise and more.

Find out more about Allen at his great website: hhttp://allenlongauthor.com/