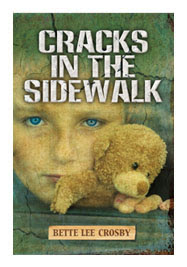 Book Review: Cracks in the Sidewalk by Bette Lee Crosby

Cracks in the Sidewalk peaked my curiosity from the word go. As Claire explained her desire for a large family I found myself immediately drawn to her. As an only child myself, I completely understand the desire to surround one’s self with children and dreams of grandchildren. My heart broke when she received the news that she would only have one child. I could only imagine Claire’s incredible joy when she was blessed with three lovely grandchildren.
I actually stopped reading Cracks in the Sidewalk when Claire’s daughter began having troubles with her pregnancy. I am 31 weeks pregnant myself and the details of Crosby’s writing and how the characters feel so real just hit too close to home. I was able to put the book down but I still couldn’t put the characters out of my mind. It reminded me of a close friendship, you can go quite a long time without talking to someone but they are so embedded in your heart you can’t let them go. That’s how I felt about Claire and her family. I worked through the tears and went back to reading.

Award-winning novelist Bette Lee Crosby brings the wit and wisdom of her Southern Mama to
works of fiction—the result is a delightful blend of humor, mystery and romance along with a
cast of quirky charters who will steal your heart away.
Crosby’s work was first recognized in 2006 when she received The National League of American
Pen Women Award for a then unpublished manuscript. Since then, she has gone on to win
several more awards, including another NLAPW award, three Royal Palm Literary Awards, and
the FPA President’s Book Award Gold Medal.
Her published novels to date are: Cracks in the Sidewalk (2009), Spare Change (2011), The
Twelfth Child (2012), Cupid’s Christmas (2012) and What Matters Most (2013). She has also
authored “Life in the Land of IS” a memoir of Lani Deauville, a woman the Guinness Book of
Records lists as the world’s longest living quadriplegic.
Crosby originally studied art and began her career as a packaging designer. When asked to write
a few lines of copy for the back of a pantyhose package, she discovered a love for words that
was irrepressible. After years of writing for business, she turned to works of fiction and never
looked back. “Storytelling is in my blood,” Crosby laughingly admits, “My mom was not a writer,
but she was a captivating storyteller, so I find myself using bits and pieces of her voice in most
everything I write.”

To learn more about Bette and her books, check out her website: http://betteleecrosby.com/

Posted by iamagemcrystal at 7:06 PM