Praying for Restraint is now available to purchase on Amazon in both paperback and as a Kindle book as well as Barnes and Noble and as a Google Book.
--- Review by Cathy Hansen

Having read a brief description of Praying for Restraint, I was curious.  One of my college roommates was a CNA for a couple years.  I was always amazed by her stories about coworkers and patients from her nursing home, and her willingness to do the demanding job.  Her stories left me with a great deal of respect for anyone who took on the job of serving others as a CNA.  I appreciated the pain and difficulty she faced when a patient passed, and admired her humor when she could say it was a good day at work because, “I didn’t get any poop on me today.”  Because of this experience with my former roommate, and having had some wonderful CNA’s who have touched my life, a memoir about the work of a CNA sounded like an interesting read.

I expected to read tales of helping others while performing a very challenging job with long, stressful hours.  I expected to read about understaffing and perhaps a few bad apples in patient care.  I was definitely not prepared for the horrors described within the pages of this book.  I finished the book feeling sad, angry, and frustrated that many patients did not get the level of care as ordered by their doctors and expected by their families.  I was furious that those working to provide that care are not always treated humanely or provided with all of the help and tools they should be.  It was appalling and eye-opening to read stories of mismanagement of resources, rude supervisors and coworkers, and poor patient care, even patient abuse. 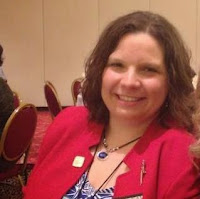 Cathy Hansen is a wife, mom, teacher, independentbeauty consultant, and small business owner. She and her husband operate SeedsNBeans, a local nature store, in Two Rivers, Wisconsin.
About the Author, Allen Long

You can discover more about Allen and his work on his website: http://allenlongauthor.com/.
*****THANK YOU WOW! WOMEN ON WRITING*****
Posted by iamagemcrystal at 8:22 PM