Book Review: Not So Long Ago, Not So Far Away by Trisha Slay 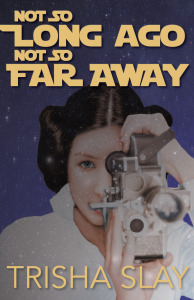 Not So Long Ago, Not So Far Away
by Trisha Slay
Review by Crystal J. Casavant-Otto

I don’t remember watching Star Wars and I was born two months after it was released in theaters, but novelist Trisha Slay made me feel as if I had been there in the theater taking in each frame of the film. Slay’s novel, Not So Long Ago, Not So FarAway was so well written that I imagined myself a troubled teenager, coming of age and being transformed during the summer months of 1977.

Erika (the lead character) is the reason I loved this book, because she is every teenager girl; awkward in her own skin and unsure of herself. Not only does she struggle for acceptance, but struggles will self-doubt. Erika doesn’t see what the rest of the town sees which makes her character so real.

Erika had been the chunky side-kick to her teen beauty queen best friend, Cassie. When Cassandra disappeared, all the attention moved to Erika who had been plotting Cassie’s escape. Each question made Erika question whether she had really known Cassie at all. Erika even had her own doubts; she wondered if Cassie had arrived safely in Hollywood to live out her dream.

The summer was dragging on for Erika, with no word from Cassie. Erika would write letters to her friend. Letters she never intended to mail, but letters that helped her feel less alone, less like an outcast. Erika felt totally misunderstood and completely alone – that was until Star Wars was released. The movie and her summer cleaning at the Bixby Theater made all the difference in the world to Erika.

Not So Long Ago, Not So Far Away is filled with interesting characters and even though the majority of the novel takes place at the Bixby Theater, Slay paints a lovely picture of the world surrounding Erika. The Bixby may be crumbling, but it is a lovely historical theater filled with plenty of rooms to explore.

Sonny and Jeff are fascinating characters, but the most intriguing character in the book may be the missing teenage beauty queen Cassie. I couldn’t decide if I loved her, felt sorry for her, or hated the way she seemed to leave her supposed best friend in her shadow.
Even though the story took place before I was born, you get the idea that parts of it happen every day in schools across the nation.

If you want to find out how Erika’s life was transformed, you’ll have to read Not So Long Ago, Not So Far Away for yourself. I’m hoping Slay is working on a sequel because I can’t get enough of these characters and I want to know what happens next. I would definitely recommend this book to others; I give it two thumbs up!

To order your copy (or pre-order if you are reading this before May 21st), click here: http://trishaslay.com/buy-the-book/

Thank you to Trisha Slay who I have had the pleasure of working with. I love the opportunity to work with fabulous authors and it's so exciting to read great novels before they are released for the world to fall in love with.

Posted by iamagemcrystal at 8:20 AM