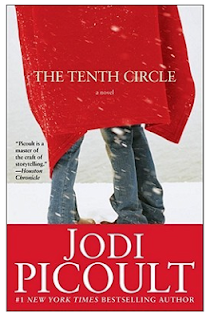 The Tenth Circle by Jodi Picoult, published by Washington Square Press is a fabulous work of dramatic fiction. The paperback version was released in 2006 and I’m ashamed to say that it took me this long to lay my hands on it. This is a great book for young adults as well as those who are young at heart. The Tenth Circle appealed to me as a parent but vividly brought me back to those years of middle school and high school.  Devoted husband and father, Daniel Stone, is brought back to his own childhood as he struggles to put the pieces of his family puzzle back together. The story and the characters are sure to draw you in and take your breath away.

The rebellious artist falls in love with the good girl and gets her pregnant. Fast forward fifteen years and the comic book artist is married to the college professor and they are raising a teenager daughter. On the outside they appear to be the all-American family. On the inside, Daniel, his wife Laura, and their daughter Trixie are fighting their own demons. Those demons aren’t all that different than the super-hero’s of Daniel’s comic strips. Each character appears docile on the outside but there’s anger and destruction bubbling beneath the surface.

Daniel’s wife is teaching her college students about Dante’s Inferno while their daughter is tumbling into a hell of her own. The Tenth Circle talks about some very tough topics such as date rape, marital fidelity, suicide, and the struggle between good and evil. This is a memorable book with characters you cannot stop thinking about. Picoult is a master of her trade; the vivid imagery and detailed descriptions of each character make this a book that will stick with you long after you’ve closed the cover.