Boy - it's been a while since I put my 'pen to paper' as they say. Lots has happened. Some of the things that transpired are not ready to be shared. One of them isn't ready, but I want to share it any way. Judge me if you like, but read to the end and you may just understand what took me 35 years to figure out.

"I wish upon tonight to see you smile, if only for a while to know you're there..."

These words move me to tears, because I have been crying every day since March 24th 1994 when my Daddy died. I dated men who were emotionally unavailable, treated myself poorly at times, and didn't make very good decisions. I didn't feel very valued, because the person who valued me the most had been taken to heaven all too soon. I married a fabulous man at Christmas time in 2000. We were married in the same church sanctuary where I had buried my father. The pain was nearly too much for me to bear. We invited less than a hand full of people, because I was too sad and didn't want to attempt the white wedding.

My marriage ended quickly and painfully. I continued to date emotionally unavailable men. There was nothing wrong with them, but it was clear that we were not right for one another. My career continued to go as planned, so instead of admitting that I was unable to function in a healthy relationship, I submerged myself in my career and ignored the warning signs of being 'out of control'. I thought I could do it all and I was convinced that I didn't need anyone. The summer of 2007 I found myself homeless with a 5 month old daughter. I was living in a camper in a friend's back yard. I was still convinced that I had it "all together", even though my car was repossessed, I couldn't afford formula, and I had borrowed $400 to buy a beater car to get back and forth from work.

I just shrugged my shoulders and figured that everything would work out. And then I met a guy on the internet (MySpace) and agreed to meet him for drinks. Not real proud of what transpired that evening, but he looked and acted just like a man I had loved...so I did the unthinkable and had a one night 'fling' with a stranger...I'll cut to the chase and tell you that I stopped losing the baby weight from my daughter, and didn't get my period. (this should explain exactly what happened that night, right?)

Let's fast forward to early 2008 - I have a daughter who isn't even a year old, and I'm expecting a son. No one is exactly thrilled for obvious reasons. I am broke, not making good decisions, and I have no idea how to take care of ONE baby, much less TWO. I decide to name my son after my father - probably hoping that in some way I can fill that void and ease a bit of the sadness I've been feeling. I wasn't super excited when I found out I was pregnant, I am not a great mom by any means - I do the best that I can. It wasn't until 2010 that I finally found the love of my life and we were married on August 11th 2012. (that's another story)

I made poor decisions and I had children because I was searching for love and somehow equated sex with love and thought children would ease my loneliness. My children have suffered a fair amount of heartache because of my selfishness. However, here's the happy ending. The picture below was taken at my wedding, and the conversation between my four year old son and I shows exactly how resilient, loving, and understanding a child can be. Parenting isn't as difficult as we make it - it's not about the decisions we made that made us parents, single parents, recovering parents, struggling parents, etc...it's about the love we show our children, the love we receive from our children, and the love we teach them when we help them lean on their Lord and Savior - it truly is LOVE BEYOND REASON

"I love you my handsome prince"

"Will you always think I'm the prettiest girl in the world?" 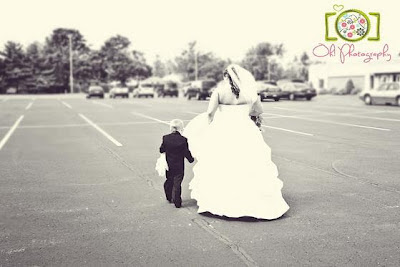 May your paths be abundantly filled with lemons, sugar, sunshine and the ability to forgive yourself. You don't have to be perfect - and loving yourself is something you'll have to do before you can expect someone else to love you.

Posted by iamagemcrystal at 9:54 PM