The Only One
“Linda? Hey, are you home? Helooooo?” Phil called to his girlfriend as he set down his empty coffee mug on the island in the kitchen. Hearing no response, he shrugged his shoulders and picked up the newspaper and me, his buddy Whiskers. We settled in on the couch, I was purring gently while Phil tried to take in the day (or forget the day – I was never sure which).
The local news on the television.
Old tabby cat in one hand.
Ipad in the other.
Predictable.
Simple.
Phil quickly fell asleep – just as he did every other evening after a long day at the insurance office. Phil and Linda had been living together for just under six months; they had settled into a routine. I didn’t mind Linda so much. She was much better than the other girls Phil had brought home. Missy was high maintenance and claimed to be allergic to me, Shawnda was some sort of dancer and her high heel shoes quite frankly scared me to death as I was afraid she was going to step on me, and then there was dear Lilly….I liked Lilly…at first. Lilly smelled like soap, she baked cookies, and she liked cats. She would stoop down and scoop me into her arms and scratch me in all the right places. She was really sweet, but she had this crazy habit of running to the bathroom right after eating. I followed her in there one time and watched her make herself sick. I never understood that, but Phil said something about her needing help. After a few weeks, she was gone and Phil found Linda.
I had a feeling Linda was going to be around for good. Phil called her his soul mate and had bought a ring. He was planning on waiting a few months, but he was definitely planning on proposing before summer ended. M-E-O-W….
Phil woke with a start and tossed me on the floor. Good thing for nine lives and the always landing on my feet thing. He was frantically running around the apartment. Not sure what prompted all this craziness, but he tossed his suit coat on the table and ran out without his shoes on.
Meow, Meow, Meow….I’m starving. This isn’t like Phil or Linda. There’s no food in my dish, no water in the bowl, and I’ve resorted to lapping water from the toilet. My belly is empty and aching and I could really use some help scratching that spot behind my ears that I can never quite reach. The television is still on and it’s been days since anyone has been home. I’m getting sick of Oprah and the news and wish Linda would get home so we can watch Friends or Charmed…
Yes, Yes, Yes – it’s a key in the door…
Who invited her? It’s Phil’s mom. She never liked me and if I could talk I would have told Phil about all the times she kicked me under the kitchen table. I’m not some sort of dog…all I wanted was some attention. There’s another lady with her; she looks like Linda but with more grey hair and her ankles are much thicker. They haven’t noticed me yet; I’m going to stay hidden until Phil or Linda get here.
Phil’s Mom: “He still has that cat?”
Ankles: “Linda mentioned a cat – what was his name again? That’s right – Paws or something, isn’t it?”
Phil’s Mom: “I don’t really know, but I suppose we should put some food out for the fowl thing. Then we will have to find someone to take it. I certainly don’t want it.”
What? Take me where?
Ankles: “This is going to be harder than the funeral. I wish there were an easier way to do this. I just don’t feel up to it.”
I went back to watching the news and was surprised to see Linda’s picture. The reporter was talking about a terrible accident near the lake…the woman jogging had been struck by a drunk driver….her boyfriend jumped in trying to save her…. 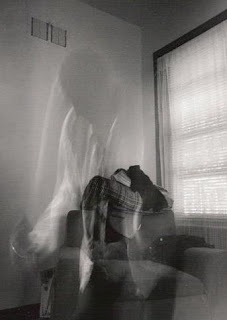 Something by the door caught my attention. It was Phil – yay! Daddy’s home! I couldn’t be happier. Why hasn’t anyone said anything to him? Why isn’t he petting me? He’s dripping wet, but there’s no puddle on the carpet. I don’t understand. The television reporter is talking about how the young couple’s funeral was so well attended. What funeral? Phil’s right here…
Phil’s Mom: “I feel close to him here. He’s always going to be my baby. I never thought I’d have to bury my son….”
She’s sitting at the kitchen table now, with her head in her hands. I’m very confused and hungry. Phil is standing right across the room – right by his favorite chair – right by the suit coat with the engagement ring in the pocket…why am I the only one who can see him?


Yes - this story was written from the perspective if Whiskers the Cat. Not sure why things went in this direction, but they did. Thank you Ellyn Toneys for the fabulous picture that inspired today's story.

May your paths be abundantly filled with lemons, sugar, sunshine, and inspiration from friends!
~Crystal
Posted by iamagemcrystal at 5:02 PM