When Breccan was born I had a goal of breastfeeding him until his first birthday. I wanted him to be exclusively breast fed and I swore I wouldn't give him a bottle. Well...here we are 17 weeks later and he doesn't like to latch and though he still drinks breastmilk, my goals seem laughable as I hold him in my arms and bring the bottle to his lips. Even though he does drink from a bottle, it was important that the bottle we chose would be as close to the real deal as possible. That's where the Medela Calma comes in.

Here's how it's advertised: 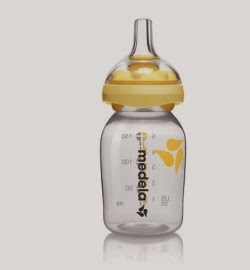 Now that he's older, Breccan has decided he likes the Tommie Tippee better, but for the first few months, the Calma was the only bottle we would use. I didn't worry about him getting too much or too little because HE controlled the flow. Because I was pumping and then feeding him I was saving a few steps because the same bottles I was pumping into (with my Medela Pump in Style and/or my Medela Freestyle) would just come off the pump and be ready for the nipple. The nipple itself comes apart for quick and easy cleaning and there's never any spilling (as long as the nipple isn't on crooked..says the sleep deprived mommy). I give this bottle 4.5 out of 5 stars. The only thing that would make it better is if it were more breast like. The sucking action is very breast like, but as far as Breccan is concerned, there's not enough squish.

If you live in the U.S and you'd like to win one of these bottles (retail value $19.99) to try for yourself, complete the Rafflecopter form below. A winner will be chosen on Monday, February 9th and announced in the comments of this blog post.

This contest is open to Us Residents only. Giveaway ends on February 9, 2014 at 12:00 am CST. One lucky winner will be randomly chosen that same day via Rafflecopter. We verify all entries to make sure they were entered correctly! Once the winner is selected, the announcement will be made within this widget and as a comment on the original blog post. We will also follow up via e-mail. Winner has 24 hours to respond or we will choose another winner. Good luck!
Posted by iamagemcrystal at 12:01 AM