A Suitcase of Bitterness and Sacrifice

This is a rough draft at a flash fiction piece - comments are appreciated. It needs to be shortened considerably to meet contest requirements.

A Suitcase of Bitterness and Sacrifice
Her favorite silk panties were in her hand. They sent a chill up her spine. The day she bought them she marched confidently into Victoria Secret with the gift card from her husband. That day she felt like a princess. Today, the panties brought her no delight. She thought about all the sacrifices she had made and every gift he gave her made her bitter. She felt dirty and alone. The lavender panties with lace details were no longer beautiful and soft in her eyes. To Veronica, they were dirty and shameful. Instead of folding them in her suitcase, she tucked them between two pairs of boxers in Charlie’s underwear drawer.
“You’ll miss me you son of a bitch”…Veronica muttered…
The dress she bought on the cruise they took in celebration of five years of wedded bliss. The dress weighed practically nothing, but it was unbearable in her arms. Veronica and the dress fell to the floor in a heap. Her tears were coming quickly now. Yesterday she swore she wouldn’t cry, but standing in the bedroom they shared, in the house they built together, it was just more than she could bear. She ran her fingers along the shiny smooth floor boards and remembered choosing every detail of their home. Building their home was a labor of love for both she and Charlie and she couldn’t believe this was happening.
“I wonder if he screwed her in our bed or if she was impressed with the marble countertops? I hope she screws him over.”
Her sorrow subsided and the anger took over. She folded her things neatly and placed them into the cool dark suitcase. Her physical motions were methodical and cautious but her emotions were all over the place: How could he have done this to me? I quit my job at the paper to stay home and be the wife he always wanted. I hardly saw my family and my friends turned away a long time ago.
“It’s all a joke – I’m a joke!” she hollered as she sent the suitcase and all its contents flying across the room.
Thud…the suitcase hit the wall and her things fell into a mess on the floor.
“Let his little hussy pick up the mess.”
And with that, she grabbed her designer handbag, her rhinestone sunglasses, and her cosmetics bag – she turned delicately on one foot, threw her hair over her shoulder, and walked out of their house. She was walking out of the house, out of his life, and away from everything she had ever known.
Veronica had made plenty of money during her literary career and Charlie was a talented business man. She wasn’t worried about money, and she wouldn’t give him the satisfaction of staying at some flea bit hotel. Going home to her mother’s wasn’t an option either. She phoned the nicest hotel in town and arranged to stay in one of their finest suites.
“How long will you be staying Mrs. Tempess?” asked the young woman on the phone.
“Indefinitely, thank you. Bill the charges to my husband’s company. I’m sure you’ve heard of it – Tempess Tech?”
“Yes ma’am, of course ma’am” said the girl.
Veronica ended the call and tossed her iphone into the cup holder of her Escalade. Since she hadn’t gone through with packing, she would need some new clothes. But first, a trip to Starbucks was in order. She needed some caffeine to clear her head. Waiting in the drive through for her Venti Hazelnut Latte Frescante she decided she would also stop and get a mani/pedi and some highlights before checking into the Iron Horse hotel in downtown Milwaukee. She dialed Monique at Neroli, the Aveda Salon on Chicago Street. The warm greeting was exactly what she was hoping for.
Veronica’s afternoon was filled with laughter, coffee, and pampering. Monique had called in a favor from Jordan Dechambre.
“Jordan love, it’s Monique. I have a client who needs a week’s worth of clothing… 2…34C….purple and yellow please…Spare no expense.” (Veronica could only hear one side of the conversation, but it seemed promising) 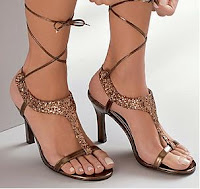 Jordan was a wardrobe consultant who was happy to provide Veronica with everything she would need. When Veronica arrived at the Iron Horse, she was pleased to find a fresh bouquet of flowers in her room, and the closets and drawers were filled with her new clothes. After a luxurious bath, she slipped into the red silk thong and matching bra Jordan had chosen for her and walked to the closet to see what she could find that would be appropriate for a cocktail at the hotel bar. Jordan had not disappointed her. Veronica slipped into a jet black a-line/princess halter knee-length chiffon dress. She was curious if the ladies had remembered footwear. She opened the armoire and found the perfect match to her sexy dress. She couldn’t have looked better. She slipped into a pair of t-strap sandals with three inch hells and ankle straps.
A touch of bronzer and gloss, a pair of earrings, and she was ready to go. She ran a comb through her long blonde locks and headed down to the hotel bar. This would be the night she left behind that suitcase of bitterness and sacrifice. And when the handsome stranger with broad shoulders, a kind smile, and twinkling eyes asked “May I buy you a drink?” there was no hesitation from Veronica. She was ready to delight in whatever the future had to bring. She already enjoyed the way he looked at her and she knew this was a man who would appreciate what she had to offer.
Posted by iamagemcrystal at 7:57 AM